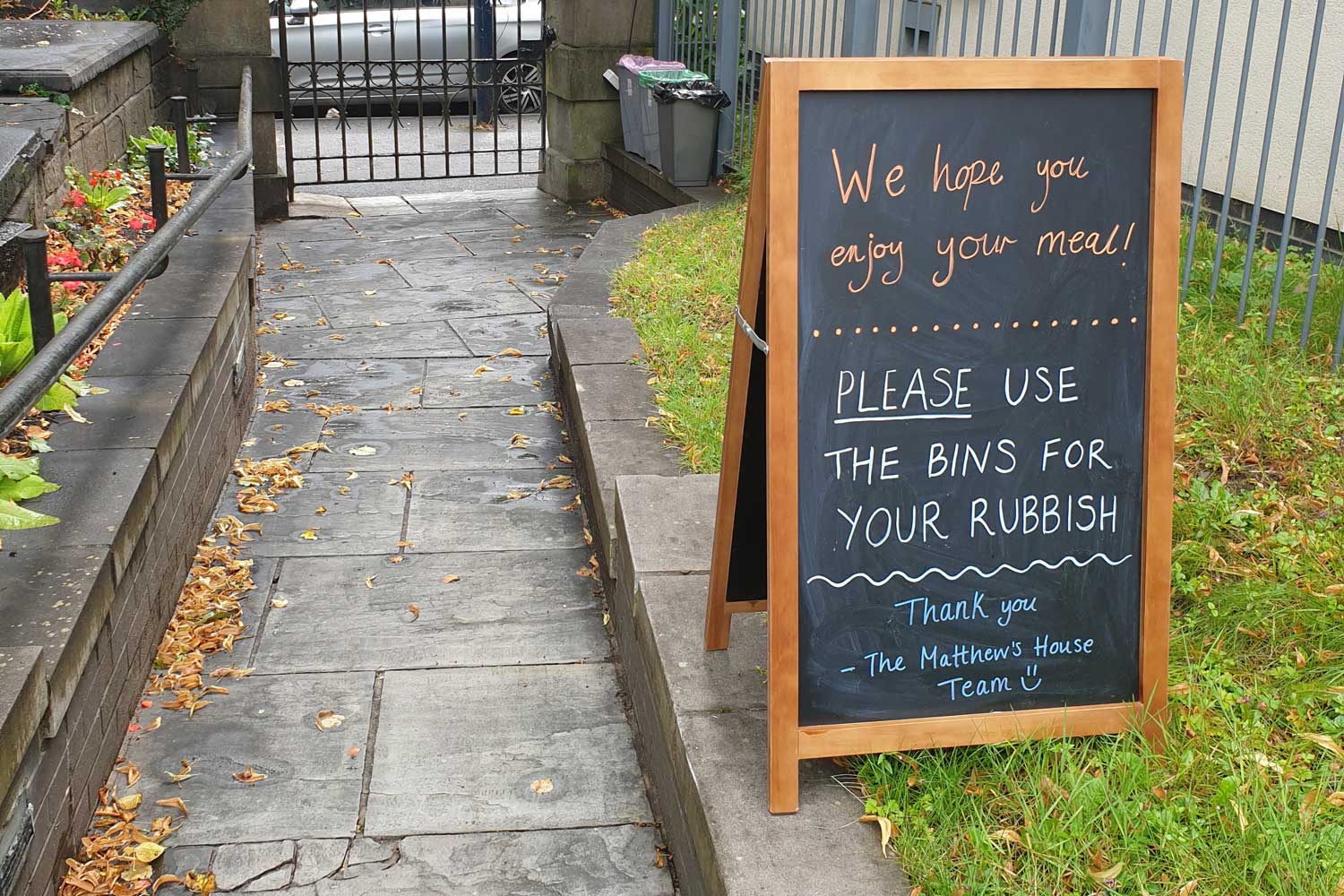 We just completed our first month into our new takeaway setup and it was a great success! We were open on Sunday, Monday and Tuesday at the new times of 11:30-1:00pm for an emergency takeaway service.

Since day one we had been seeing growing numbers of people attending each day, showing that the word was getting out to those who need it. END_OF_DOCUMENT_TOKEN_TO_BE_REPLACED

On one of our first days serving a takeaway in August 2020, three chaps came over who are homeless and have been staying in B&B’s throughout lockdown with no luck of getting permanent accommodation. The first thing they said to us was “Thank you”.  In their own words they could not have survived without us during this period – the daily meals were a lifesaver for them. They described their experience of living in a single room with just a toilet and shower, that you can’t cook or store food, so everything is more expensive and generally difficult to manage. They were incredibly grateful to the Swansea Together network and that they could still get a food parcel daily even now in takeaway form. Three people and three thanks yous made our day!

This is a story about one of our Guests at Matthews House, that they have written and permitted us to share

Swansea Together means, for me, supporting the local community in all ways, from picking up litter as you go, to supporting your local traders and Matt’s House for the wonderful work they’ve been doing. How lucky are we to have such creative, caring and enterprising young people who’ve picked up the slack and kept running. END_OF_DOCUMENT_TOKEN_TO_BE_REPLACED

Grace's Story - A Volunteer's Story from Matthew's House on Vimeo.

Grateful Guest returns to help out

One of our guests who frequented the café whilst sleeping rough in Swansea. He came in for food, warmth and company.

He now has a flat of his own and a part-time job. He is so grateful for the support he received at Matt’s Café that he now calls in every day towards the end of the service to help mop the floors and prepare for closing time.

A guest came in one Sunday night. He was asking for help because he had been sleeping rough in Neath and his tent got burnt down. He was picked up by police and dropped here to receive help. He had a full time job and was unable to access services during the day out of fear of missing work. As it was a Sunday night we were limited in what we could do; temperatures outside were dropping to -4 that night and we were really concerned for him. We kitted him out with a sleeping bag, tent, thick coat and bag. He had a hot meal, charged his phone and stayed all evening until we closed. We took his number and promised we would get more information for him the following day. We also advised him of where he could sleep in the city centre and that the rough sleeper intervention team would be out in the morning.

We emailed the local authority immediately with his situation in the hope that they would reply first thing in the morning; and they did. The good news was that he was registered in Neath and they were able to contact the correct people to support him. We haven’t seen this man since but we are just glad we were open and available for a short while in his time of need.

A couple of weeks ago, a guest came in on a Tuesday afternoon towards the end of the service.

He was so thankful that the café was still open, as he told the volunteers that he hadn’t eaten since the previous Friday. He was well fed and watered before he left.

This Tuesday that guest returned. He only had a cup of tea but he told one of the volunteers who had given him food on his previous visit: “Thanks for that. You probably saved my life that day!”

The Importance of Hospitality tours!

During a recent workday by the Olchfa pupils, one of them stated: ” I didn’t know toilets could be fun!”

This was during a tour of the new toilets and shower room which were not finished the last time the pupils were in.

They were very impressed by the bright colours and décor.

One Monday morning in the autumn of 2019 we received an early caller to Matthew’s House. As we were not yet open, one of the team spoke to the guest and reminded him of our opening times as he was a regular. The guest was a man who seemed more confused than normal and not his usual self. Within the first few minutes the guest collapsed on the doorstep with a seizure. Following this, he lost consciousness and went into cardiac arrest. The volunteers called 999, whilst a member of the team began to render first aid to the gentleman. It became necessary to commence chest compressions and one of the volunteers ran to the railway station where there was an accessible defibrillator.

END_OF_DOCUMENT_TOKEN_TO_BE_REPLACED

An awesome couple and some crisps

One Sunday afternoon at Matthew’s House a young couple came in to donate. Nothing unusual about that. .. but this couple were awesome because they had once been guests of Matthew’s House. For more than six months they had lived together on the streets of Swansea – sometimes in tents. For them, Matthew’s House had been a lifeline. Eventually they got a message about a home being available for them to move into but it was out of county and in mid Wales – more than 2 hours away from Swansea. They moved as they didn’t want to live on the streets anymore. That Sunday they were coming down to Swansea just to say hello, donate to us and thank us for being there for them when they needed it the most. They also said they miss Matthew’s House, Swansea and hope to be back one day! We were very glad to see them again and grateful for their donation of a sackful of crisps.